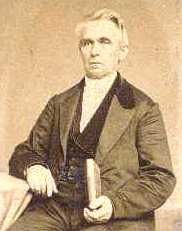 We cannot be too certain when that first local church of Presbyterian label was formed. It may have been in December of 1821 or 1822. Accounts differ, but southwest of Crawfordsville about two miles, in an unfinished cabin built by Mr. John Cowan, a simple religious service was held on Sunday morning. The preacher was Rev. Charles Beatty. That same afternoon the group met again to witness the wedding of one of Mr. Cowan’s daughters to Samuel D. Maxwell.

On June 20, 1824, the Presbyterian Church of Crawfordsville was duly constituted by Rev. Isaac Reed, who sent for that purpose by the central State group in Indianapolis. Crawfordsville Presbytery (a group of churches) began to function in 1829. These early home missionaries such as the Reverends Beatty and Reed were commissioned to work in the “Western Country” by the General Assembly (the national Presbyterian organization). Ministers were scarce — only 43 in all Indiana in 1825 — and most of the churches were served by these itinerant preachers or circuit riders. All of the meetings were evangelistic in character, and the rigidity of rules as to the conduct and morals of members was most pronounced. In 1827 the congregation was able to call its first pastor Rev. James Thomson (pictured at right). 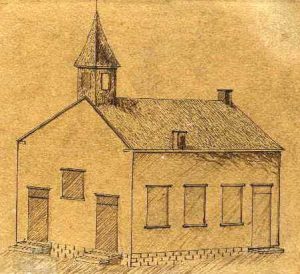 Charter members of this earliest organization of the Crawfordsville Presbyterian Church included the Dunn, Linn, Cowan, Kerr, and Miller families. Eight years after forming as a church, the congregation founded Wabash College to bring education to the frontier. With the founding of Wabash College on November 21, 1832, the concurrent histories of the church and the college indicate the continuing close relationship between developing church and the college. Ministers of the early church frequently serving as trustees and faculty. Many families – Tuttle, Elston, Ristine, Thomson, Ellis, Robinson, Gilliland, et al. – were deeply involved in the life of both church and college.

No church building was erected for several years. A Methodist, Baptist, and Presbyterian group met irregularly in the early 1820’s in either the log courthouse or the town’s first school house, which stood near the north end of Washington Street. When the Baptists built their first edifice in 1823 in the “Old Town” section of Crawfordsville, they generously permitted other denominations to hold worship and evangelistic meetings in their building. In one service, the Presbyterians added forty members to the flock. 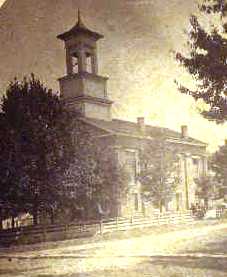 In 1829 a Presbyterian church building was begun (see drawing above) with completion coming in 1832. It stood where the City Building now stands at Water & Pike Streets. It was remodeled in 1852, and was replaced by a larger, brick structure (pictured at right) in 1871. The total cost, including site, was $18,000. An additional $3,508 was spent in 1911 for redecorating, refurnishing, and installing automatic central heating from the municipal heating plant. In 1925, when it was no longer being used by the Presbyterians, it was sold to another denomination, and was later razed in 1931 after a glorious history of 60 years.

Dissension and schism plagued the early years of the Presbyterian Church of Crawfordsville. Influenced by the somewhat more liberal faculty and first graduates (i.e. the Class of 1838), the church membership split into two groups. The Old Light or Old School group adhered to strict biblical and creedal interpretation, while the New Light or New School group allowed for individual reasoning and more latitude of interpretation of the “articles and confession of faith.”

The contention became so heated that Rev. William A. Holiday, a minister from Indianapolis sent to fill the pulpit, startled the congregation and the whole town by announcing that the Rev. James Thomson, Mr. Elihu Baldwin, President of Wabash College, and all of the other faculty members, together with their families, were “now and from this day forward no longer considered members of the Crawfordsville Presbyterian Church.” 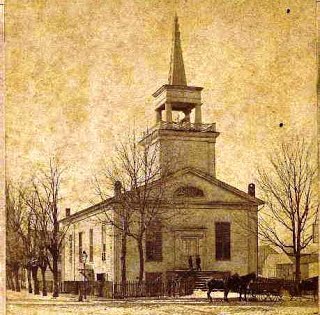 The Rev. Mr. Thomson, four of the eight elders, and nearly one hundred members thus “thrown out” began to meet independently, and in a short while obtained temporary space for their services above a downtown establishment at Main and Washington Streets. The Old School group, under Mr. Holiday, continued as they were but changed their name to First Presbyterian Church.

It was not long before the New School group with no church home of their own and over one hundred adherents became restive and thought about building. The reason is not a matter of record, but they called their church the “Center Church,” (pictured at left) and it was so incorporated by the State of Indiana in 1839. The initial Center Church building (The Old White Church) was erected in 1840 on the northwest corner of Pike and Washington Streets. This wooden church was marked by a tall central spire and high stairway approach, facing east, with another lower entrance off Pike Street to the basement and Sunday school rooms. This place of worship served for forty years, but by 1879 the increase in interest and membership indicated need for a larger house of worship. 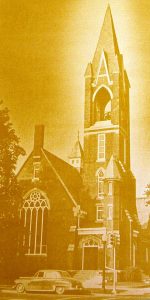 As so frequently happens, it was the women’s organization that first began to make plans. They sewed and baked, sold and saved to support their agitation for a new church home; and, as one of the dear ladies wrote: “All worked with hope and with God’s blessing… Wonderful how we were brought through.” Since some of the other churches of the town had by now begun to replace original structures with brick ones, Center Church went up at the present location on Wabash and Washington Streets. The original building cost $30,000; the 1914 addition — the kitchen and dining room on the west — called for $9,000 more.

Rev. Alexander Thomson preached at the final worship service in the Old White Church on Sunday, December 26, 1880. On the very next Sunday, January 2, 1881, the new sanctuary was formally dedicated.

Faithful ministers served faithful people in each of the two, separate Presbyterian churches over many years. They existed for 83 years as separate organizations: One served by 21 pastors and the other by 15. Time and the Spirit of the Lord are marvelous healers, and the two Presbyterian congregations, growing more and more like-minded and persuaded in large measure by their respective pastors, agreed to consider uniting. The Rev. William E. Hunter at First Church and Dr. Chester W. Wharton at Center Church were the last pastors of the two churches. As early as ten years previously some joint local services and some joint committee meetings had been suggested and held for the discussion of union. Walter Johnson and Chester Wharton at the one, and S. K. Piercy and William Hunter at the other, urged and preached union from the two pulpits. Both Rev. Hunter and Dr. Wharton offered to resign from their respective pulpits should the sessions and congregations consider union feasible. 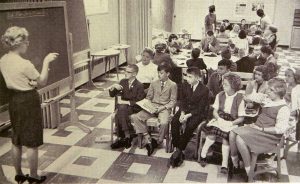 In October of 1920, the Synod of Indiana (the organization of all the state’s Presbyterian churches) met in Crawfordsville, recognizing the need for the two churches to unite. On March 24, 1921, congregational meetings were held simultaneously in the two churches and the majority of the members voted for union. The current pastors not only resigned but willingly served alternatively to supply the pulpit of the newly constituted Wabash Avenue Presbyterian Church until a new pastor could be called. The Wabash Avenue Presbyterian Church, then, dates officially from April 20, 1921. The first pastor, Rev. John R. McMahon, was called six months later. 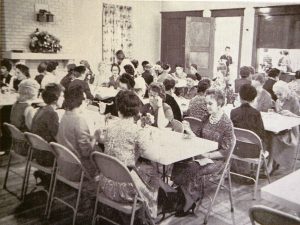 In 1969, the women of the church began the county’s first preschool, which has been funded since by the church’s annual holiday bazaar and luncheon that provides scholarships for local, underserved children.

Elder William C. Placher (1948-2008; pictured at left), who taught philosophy and religion at neighboring Wabash College, was a major Presbyterian theologian. In addition to teaching many Faith & Life classes at Wabash Avenue, Placher authored thirteen books and was the primary author of the ninth creed of the Presbyterian Church (USA): A Brief Statement of Faith.

Adapted from Donald Thomson’s original article — with thanks to William D. Stieg for additional contributions.

“In 49 states it’s just basketball, but this is Indiana.” This quote familiar to most Hoosiers conveys how much the sport means to Indiana and how much Indiana means to the sport. Although Dr. James A. Naismith created basketball at the Springfield, Massachusetts YMCA in December 1891, Indiana is where high school basketball was born. It was Dr. Naismith himself, who in 1925 after attending an Indiana basketball state finals game, wrote: “Basketball really had its origin in Indiana, which remains the center of the sport.” 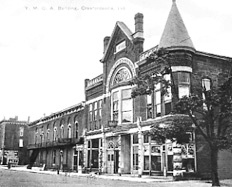 Records indicate that in 1893 the Presbyterian pastor Rev. Nicholas Craig McKay (1860-1938), an associate of Dr. James Naismith in Springfield, became the general secretary of the YMCA in Crawfordsville. McKay brought with him the skills to operate the YMCA, but more importantly he brought to Indiana the game of basketball. So it was from its beginnings in Crawfordsville that the game took off in popularity with players from Crawfordsville spreading the word about the new game to nearby communities.

By 1911, Indiana had a state high school basketball tournament, which Crawfordsville won. The game continued to grow in popularity and by the 1920s and 1930s, basketball had spread throughout the state.

After his ordination in 1894, McKay left his YMCA position to pursue congregational ministry with several congregations in California where he remained until his death.

Adapted from an article by Heath, Jaryt, and Gary Hunziker with additional information provided by William D. Stieg 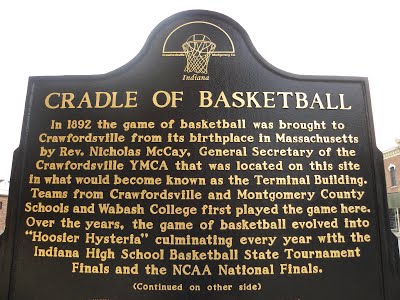 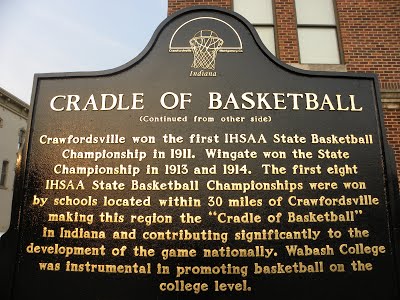 Detail from the historical marker erected in 2011 at the site of the Crawfordsville YMCA, 103 West Main Street.